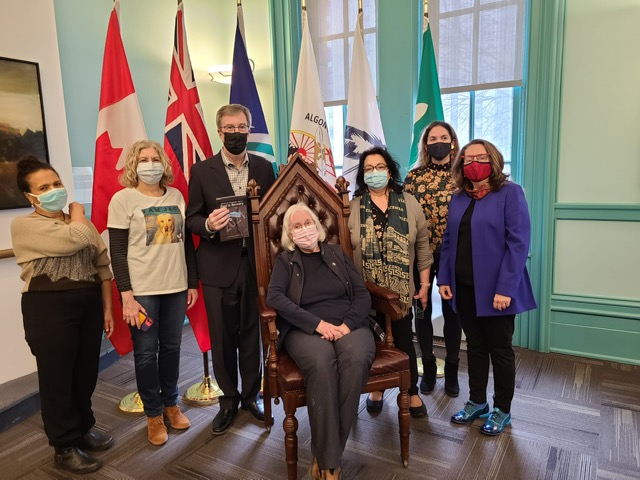 A second anthology with articles, stories and poems about the pandemic, called COVID-19 Chronicles Part 2 – Road to Recovery, was published in 2021. It was produced by Jagjeet Sharma and the Ottawa Ethnic Media Forum (OEMF).

As with the first anthology, COVID-19 Chronicles – Reflections on the 2020 Pandemic, co-published by the OEMF and the Media Club of Ottawa in 2020, some contributors were Media Club members. A presentation of the 2021 anthology, delayed because of pandemic restrictions, took place at Ottawa City Hall on March 24, 2022. In addition to Mayor Jim Watson, who received a copy of the book from Jagjeet a small group of seven writers who had items in the book attended. They are seen here: Left to right – Ainalem Tebeje, Anna Myatt, Mayor Jim Watson, Jagjeet Sharma, Sue Mardelli, and Bonnie Preston. Seated: June Coxon.

Helen Bednarek Van Eyk met Prince Charles and the Dtchess of Cornwall when they did a walk about at Ottawa’s Ukrainian Cathedral on May 19, 2022. Helen said it was delightful and that she received a souvenir platinum jubilee crown pin inscribed with “E 11 R 70”, marking Queen Elizabeth’s 70th anniversary of accession to the throne. Helen is seen in a CPAC video taking a photo of the Prince and Duchess who have their backs to the camera. To read more about the jubilee events go to – http//:www.Canada.ca/platinum-jubilee

This year Dawn Monroe reached another milestone with her Famous Canadian website. She now has 4,000 women featured on the site – a number of whom were Canadian Women Press Club members. You can read their stories by going to famouscanadianwomen.com

Congratulations to Jagjeet Sharma who received honourable mention in the North Grenville Poetry Contest for her poem, A Thought. The Experience Art Fest website features the top 10 poems submitted to the contest. To read them go to her website –   www.experienceartfest.com

Qais Ghanem was featured in a column in the June 2020 issue of Vistas community newspaper.

Shirley Van Dusen has received two honorary awards in 2020 – one from the Ottawa School of Art and another from the City of Ottawa.

Lorraine Lafreniere, CEO, Coaching Association of Canada, was interviewed on CBC radio June 28, 2022, as part of a story about sexual abuse in high school sports. Lorraine was president of the Media Club of Ottawa in 1991-2001.

A book review by June Coxon, of a children’s book, Baarack the Lost Lamb, appeared in the December 2021 issue of Vistas community newspaper. The book, by Ottawa author Colette St.-Denis, is a true story about a little lamb who became separated from his flock in Australia and was lost for five years before being rescued.

Ainalem Tebeje published a sequel to her first novel, A Love Story in Broken English, published in 2022. Her new book, called The Refugee, follows the protagonist in her first book as she becomes a refugee in Canada.