Their mandate is to improve conditions for people of African descent in society through art and culture. 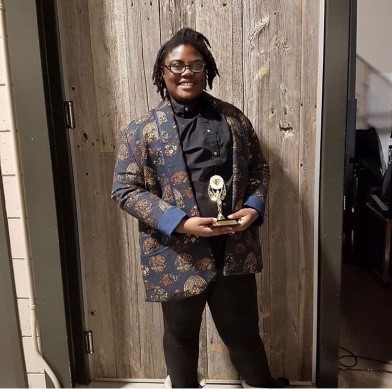 Keegan Prempeh, BSW (they/thempronouns, pronom eil), is a Black, non-
binary Sagittarius sun on a journey of self-discovery, radical transformation and healing.Xe lives on Algonquin territory in Odawa.Guided by womanism, collectivism and the pursuit of social justice, Keegan hopes to foster meaningful connections to build community

Mosaïque Interculturelle (MI) is a registered Canadian non-profit located in Ottawa, Ontario. Their mandate is to improve conditions for people of African descent in society through art and culture. Formed in 2017, Mosaïque Interculturelle provides Afro-Francophones a space to express themselves authentically on both an individual and community level. They work with a variety of national, provincial and local partners such as the Franco-Canadian Publishers Group, the Ontario Ethnocultural Group of Francophone Parents and the Outaouais Book Fair to accomplish their mission.

According to the 2016 Canadian census, Black individuals made up 31.4% of immigrants in Ontario whose first language is French, and 48.4% of newcomers in the province. Black people are also the largest visible minority group in Ottawa at 6.6% of the total population. MI was therefore born out of a specific need for community development amongst Afro-Francophones in the region. The organization’s positive impact is well described by Ludmilla Alliance, who has volunteered and worked with the team since 2017. Her initial reason for joining was born out of a desire to connect with other Afro-Francophone creatives outside of her campus circles. Access to art materials, established marketing networks and vendor spots in exhibitions are some of the many benefits that have kept her engaged in the group’s activities. She believes that spaces for Black Francophones and Black Francophiles are integral to the empowerment of her community, and given “a lack of resources targeted to French-speaking Black people in Ottawa”, supporting MI’s programs is an excellent way to fill the gap.

Championing values of culture, multi-disciplinary art, leadership, heritage and creativity, there are three main pillars through which MI has historically operated:

(1) The BRAVO awards, which highlights French-speaking individuals working to make a difference in Ottawa’s Black community. Past recipients have consisted of women who work in non-traditional sectors, those in the field of business, and journalists.

(2) The Salon du Livre Afro-Canadien, a book fair that features the works of Black Francophones. In 2021, the event was held in person and virtually over the course of a month, and included workshops, roundtable talks and interviews with selected authors. The theme was “cultivating your memory” in honour of author Marie-Célie Agnant. Marie-Célie has written over fifteen books containing a variety of short stories, novels and poems. She was awarded the 2017 Alain-Grandbois Prize from the Quebec Writer’s Academy for her third poetry collection, “Women of the Burned Lands.”

(3) Black History Month Celebrations, which over the years has included video diaries from local Afro-Francophones, African-Canadian literature readings at the Senate of Canada, and a month-long conference. Past conference workshops have covered topics like the impact of racism on Black youth mental health, Crėole, Swahili and Lingala language sessions and the contribution of Black slaves and soldiers in Canada’s formation. Last year’s Black History Month keynote speaker was world-renowned author Frédéric Boisrond. Of Haitian origin, Frédéric is a sociologist and holds an MBA from the University of McGill, which has allowed him to hold many leadership roles in the non-profit sector, including the Montreal YMCA, the Centre Action bénévole St-Laurent and the firm Solutions Feedback Active.

Beyond this, one of the first key events undertaken by the group was a collaboration with artist Pascal Smith, held in Montreal during November 2017. Titled “Vibrations”, this joint effort showcased a journey to a universe full of passion, dreams and revolution via canvas. More recently, MI proudly produced the first inaugural Afro-Canadian Visual Arts Fair, or the Salon des Arts Visuels Afro-Canadiens (SAVAC) in French. The exhibit’s goals are to highlight creative works of Black Francophones in the Canadian public and give mentorship opportunities between new and seasoned artists in the industry. This year’s theme is “New World(s)” and can be accessed virtually  until December 31st, 2022. Helmer Joseph, a Haitian expert in textile design, has been declared the guest of honour. A graduate of LaSalle College’s fashion, arts and design program, Helmer has worked with famous designers such as John Galliano, Thierry Mugler, Karl Lagerfeld and Louis Vuitton. His collections have been celebrated all over the world, including Montreal Fashion Week, Dakar Fashion Week and in the Toledo Museum of Art.

Another current endeavor is a partnership with the Afro LGBTQ+ film and arts festival Massimadi. Despite having its roots in Montreal, anyone across the country can access 2022’s selected pieces through Massimadi’s website. The festival is particularly special as it facilitates an environment for artists and activists alike to challenge homophobia and transphobia within Black populations. Laurent Lafontant, the founder of Massimadi, says their goal is to carve a space that makes “people prouder of who they are…[and lets them know] there is nothing wrong with [their identity].” This objective is supported by statistics from the Public Health Agency of Canada that demonstrate Black LGBQT+ citizens experience robust discrimination within institutions and their communities. Consequently, there are limited safe, culturally competent, effective and anti-oppressive services for queer and trans Black people to access. One solution to mitigate these harms identified by the Standing Committee on Health for LGBQT+ Canadians is the provision of social spaces for the community. The festival is thus a powerful tool to foster social change on a widespread scale.

Organizational founder Nicole Baptiste plans to expand MI’s reach on a wider scale within the next five years. However, this and all of her group’s previous activities would not be possible without the contributions of dedicated staff members, volunteers and program participants. If you’re interested in helping advance this mandate, there are a few ways to get involved, such as joining their mailing list or following them on Facebook, Instagram and Youtube. General members of the public and Afro-Francophone artists can also apply for a $30 yearly membership. Advantages of joining include a 10% discount on program admission, priority registration for events and promotion of member artist’s contact information and content. Another way you can support MI is by buying books via their online shop. 80% of individual sales go directly to the French-speaking Black authors who created the literature purchased, so you can rest assured your contributions are directed appropriately. Any of these options are a marvelous opportunity to support Black Francophones in the region and beyond.